Millions of years of naturally occurring radioactivity within the earth lead to the unique color characteristics of natural fancy green diamonds. Central and South Africa and Australia contain the alluvial secondary deposits where a green diamond may be discovered. Their extraordinary rarity makes them extremely valuable. Because artificial color enhancement processes (such as irradiation) involve radioactivity in some cases gemological institutes find it hard to determine whether the source of radioactivity is natural or man induced. Therefor these labs apply very strict grading standards thus making certified fancy green diamonds even more rare and valuable.

Like all fancy color diamonds, when manufacturing a green diamond, cutters mainly strive to accentuate its color saturation and make it as vibrant as possible. 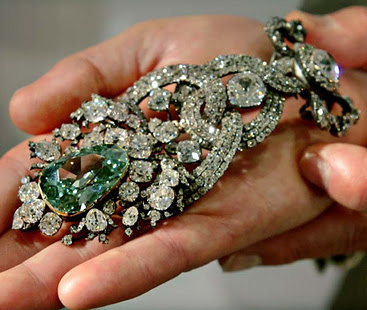 Mined in India, its weight of nearly 41 carats, makes the apple-colored Dresden Green Diamond the largest green diamond in the world. After it was examined by the Gemological Institute of America (GIA) in 1988, its size was determined to be 29.75 x 19.88 x 10.29 mm and its weight almost 41 carats, and the GIA ruled that those two factors in addition to the Dresden’s unusual green color and wonderful transparency make it one of the world’s greatest diamonds.
Its name refers to the capital city of Saxony, where it was displayed as part of the collection of the Green Vault from 1768 to 1942. Its earliest history can be traced to London in 1722, when it was shown to King George I, and a record from 1726 shows it was offered to King Frederick of Saxony by a London merchant who tried to sell it for ₤30,000. However, its first royal owner was Frederick Augustus II, who purchased the green diamond from a Dutch merchant in 1741. The diamond was first set by a court jeweler in the Decoration of the Golden Fleece, from which it was removed in 1746, to be placed instead in another Golden Fleece ornament. After this too was broken up, the pear-shaped green diamond was placed as an ornament in a hat clasp with two large colorless diamonds, and many smaller stones, and is now on display in the Albertinium Museum in Dresden. 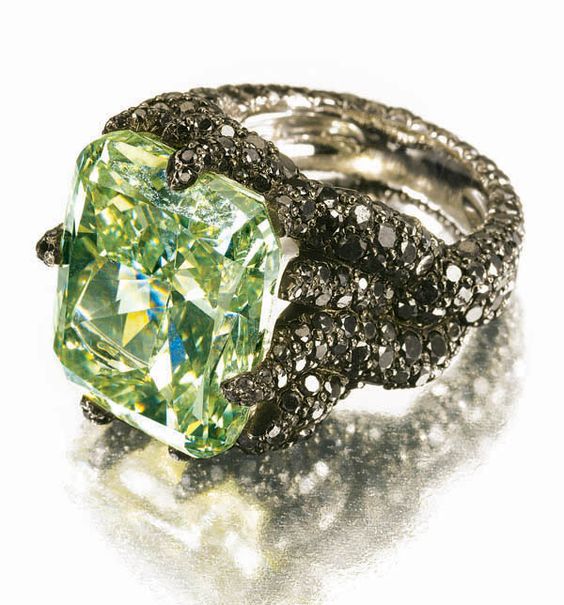 The rough stone of this green diamond came from South Africa, and in its original rough form weighed nearly 100 carats; its weight after cutting was 25 carats, which makes it the second largest green diamond in the world.
Owned by the Swiss jewelry house De Grisogono founder, Fawaz Gruosi, this rare green diamond has been set in a gold band amid 382 smaller diamonds, totaling 7 carats. The green diamond itself is free of nitrogen impurities and is determined to be in the naturally irradiated category of type IIA diamonds, as evidenced by the even distribution of its green color within the diamond’s crystal formation. This diffusion of color is extremely rare in the general category of color diamonds, and is particularly rare in a green diamond. 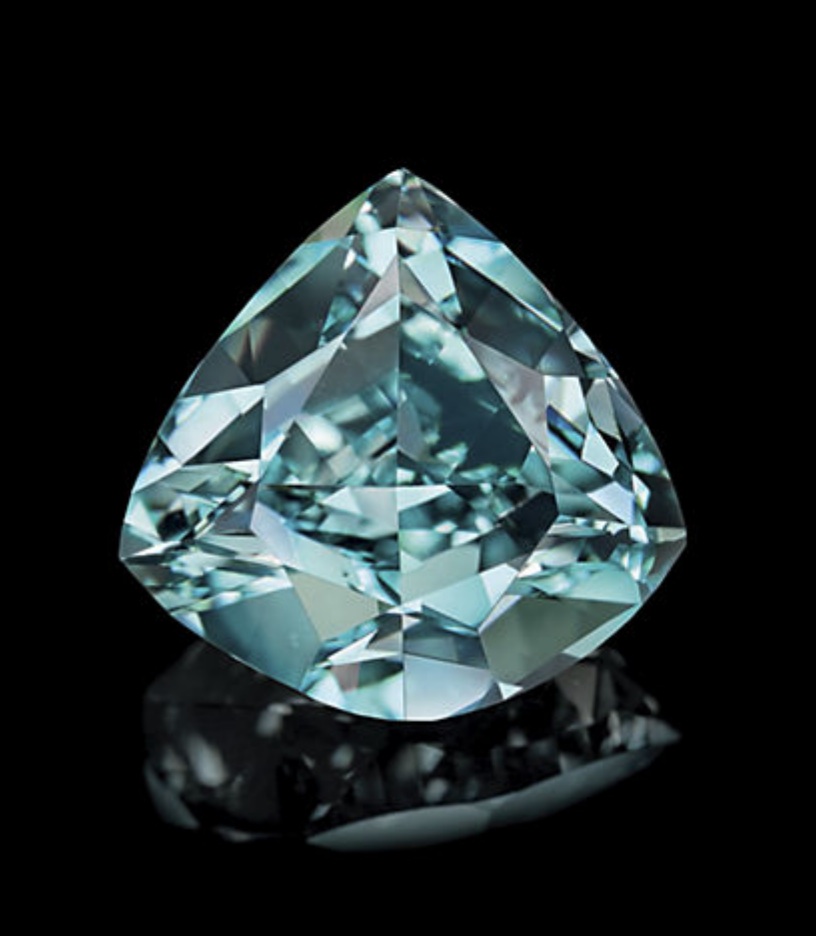 This green diamond, weighing 5.1 carats, is considered one of the rarest and most precious diamonds in the world, despite its relatively small size. The scientific analysis techniques of the GIA determined its color, the result of long-term exposure to natural radiation, to be Fancy Deep Blue-Green which is a one-of-a-kind designation among fancy color diamonds.
There is no provenance for this rare green diamond, which is unusual since a diamond’s value may derive from its history in addition to its other attributes. All that is known is that it was mined in central Africa. Also a mystery is how the current owner, the New York-based Cora Diamond Corporation, acquired the diamond. The Ocean Gem Green Diamond was part of the Smithsonian Institution’s 2003 “Splendor of Diamonds” exhibition along with diamond legends, the Heart of Eternity and De Beers Millennium Star. 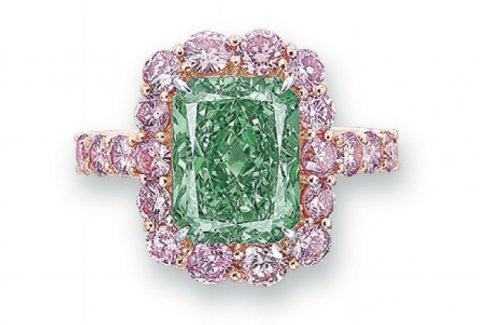 Sold recently at Christie’s auction in Hong Kong earlier this year, this diamond is the world’s largest graded fancy vivid green diamond – 5.03 Carat. It was sold for $3.3m per carat, which is a world record for a green diamond.