The Black Diamond - Black Is Beautiful

We all like to think of ourselves as being sophisticated and creative. No more following the herd, we strive to have a unique voice and appearance. We grow crazy beards, wear funky shoes and bungee jump tied to an inflated turtle.
This also reflects on our fashion choices and even the most sacred traditions such as engagement ring design. No more walking blindly to the counter (physical or virtual one) and selecting the first round cut white diamond that matches our budget and seems okay, kinda... (we read 4cs articles like this site has and can tell an I1 stone from a VS1, Yay!)
We are looking for something bold, that has a statement. What is bolder than a black marble like the diamond with smooth facets and striking angles? Considered for quite some time as a gothic fashion trend it has been elevated to a much higher status lately with numerous viewings on red carpets across the globe. Some marketers claim that it’s the “Hipster” movement’s influence that helped strengthen black diamond’s status as a fashion statement.

In the 1960's, the phrase "Black Is Beautiful" has paved the way for a large cultural movement that started in the U.S and later spread globally. In the centuries prior to that, bigotry and racism have influenced people (including African-Americans themselves) to believe that the features of black people were not pretty. Today, of course, it sounds ridiculous, as we appreciate beauty in any shape and color. So is the case with diamonds!
What is a natural fancy black diamond?
Unlike other fancy color diamonds such as blue, pink and yellow, black diamonds don't get their color characteristics from having a foreign element such as Boron or Nitrogen within the formation of the crystal, but by a large number of graphite inclusions that are so dominant, the diamond appears evenly black and opaque. This phenomenon is quite rare.

What makes a natural graded fancy black diamond more valuable than a treated one?

Like almost everything associated with diamonds, we appreciate the miraculous work of nature much more than man-made artificial processes. A treated black diamond is no more than a very low grade regular white diamond, that is probably more suitable for industrial purposes rather than jewelry design, and was artificially enhanced to become darker and more (but not completely opaque).

Are there any famous black diamonds?

Yes of course. The most known one is the Orlov black diamond (also known as the "eye of Brahma") is now a 67.5 Carat cushion-shaped stone. It has a fascinating story behind it – It was allegedly stolen by a monk from a Brahma statue in India (where it was discovered in the 19th century) and therefore supposedly cursed, as a few of its later owners jumped to their death from skyscrapers. It was later cut in Three pieces by Charles Winston (the original stone weighed 195 Carat) in an attempt to break the curse! See picture below of its gorgeous setting. 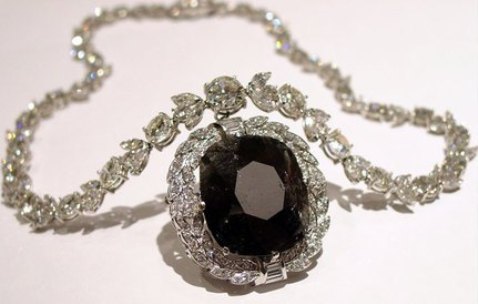 The 88 Carat “Karloff Noir” black diamond made an appearance at a Dubai Mall to promote the reopening of a Karloff Paris boutique, a jewelry group with 50 boutiques worldwide
This rare stone was discovered in Siberia in 1917 as a 421 Carat rough diamond and boasts very rich black opaque color. Daniel Paillasseur who was the founder and managing partner of Korloff Paris purchased this diamond back in 1978 and named it after the royal Russian family, Korloff-Sapojnikoff, which were the original owners. 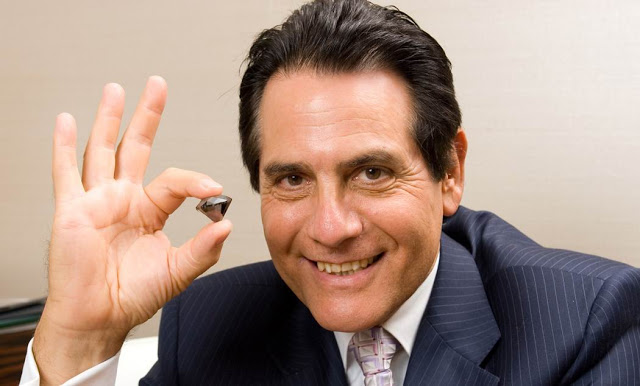 The Spirit of de Grisogono is the world’s largest known cut black diamond. It weighs 312.24 Carat which makes it the world’s fifth largest cut diamond. The stone was discovered in West Central Africa and weighed 587 Carat at its rough state. It was later exported to Switzerland, where it was cut by world-famous jeweler Fawaz Gruosi using the traditional Mogul diamond polishing methods. The amazing stone is set in a white gold ring along with 702 smaller white diamonds weighing a total of nearly 37 Carat. The current owner of this diamond ring is unknown. 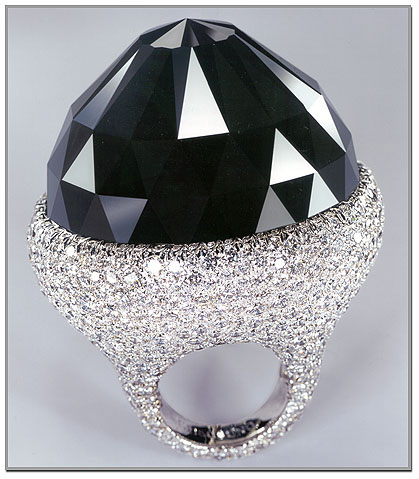 There is also a mysterious 555 Ct black diamond reported a few years back on an IDI (Israeli diamond institute) article. It has 55 facets (the number 5 is considered an omen against bad luck in middle eastern folklore) and should be the world's largest natural fancy black diamond. Though I've spoken with its manufacturer a couple of years ago, and he confirmed it to be all true I haven't encountered any official record of it (like a GIA certificate, perhaps).

We at Reddiam Ltd have become quite experts at cutting natural black diamonds, though traditional round cuts are still most popular we also have a few selected diamonds in pear, cushion, and radiant shape as well. We cut black diamonds from 1ct up to 10ct and of course always send them to GIA to be certified, as demonstrated earlier, there's a huge difference between a natural fancy black diamond and a treated one.
Check out our black diamonds page to see what's new.

Also, "James Allen" is another great resource where you can design amazing natural fancy black diamond rings, displaying 360 videos so you can inspect every stone carefully.